MALAYSIA: NO FREEDOM FROM RELIGION 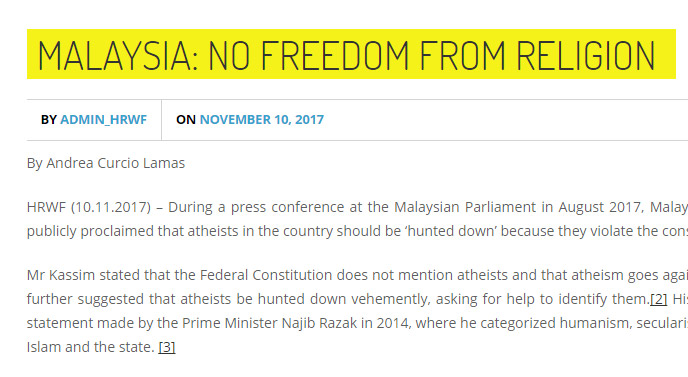 19 Nov MALAYSIA: NO FREEDOM FROM RELIGION

HRWF (10.11.2017) – During a press conference at the Malaysian Parliament in August 2017, Malaysian Minister Datuk Seri Shahidan Kassim publicly proclaimed that atheists in the country should be ‘hunted down’ because they violate the constitution.

Mr Kassim stated that the Federal Constitution does not mention atheists and that atheism goes against the Constitution and human rights. He further suggested that atheists be hunted down vehemently, asking for help to identify them. His statement follows an equally concerning statement made by the Prime Minister Najib Razak in 2014, where he categorized humanism, secularism and liberalism as a dangerous threat to Islam and the state….