Thai Youth Know Their Human Rights and Demand They Are Respected, Starting in Schools 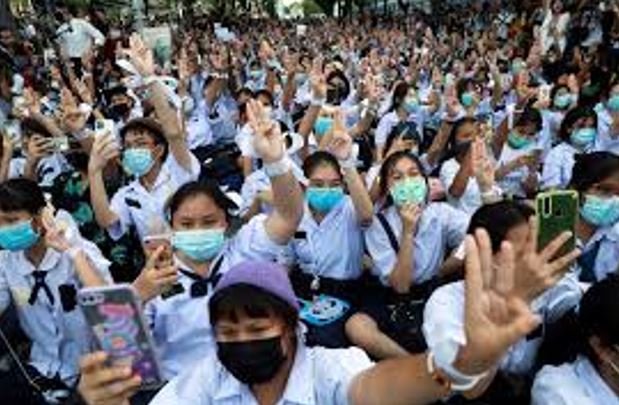 12 Nov Thai Youth Know Their Human Rights and Demand They Are Respected, Starting in Schools

Thai student protesters, calling themselves The Bad Students, are calling for an end to all forms of harassment against students demanding democracy, revocation of obsolete and abusive school regulations, and educational reforms with students’ full participation.

The students see school as the first dictatorship in their lives, with its top-down structure and wholly unaccountable operations. The authoritarian culture of teachers and school administrators, the archaic and petty rules that control everything from clothes to hair length, the discrimination against LGBTQ students, the uninspired rote learning methods — all of these things are problems. The Bad Students believe their campaign for school reform is part of the wider political campaign to end authoritarian rule in Thailand.

It is now a familiar scene at every democracy rally across the country to see children from middle school and high school among the participants, even giving speeches onstage. They have also held their own rallies on school grounds and occasionally taken to the street, including at the largest democracy rally to date, on Aug. 16 at the Democracy Monument in central Bangkok. On that day, tens of thousands of peaceful protesters called for the dissolution of parliament, drafting of a new constitution, ensuring respect for freedom of expression and other human rights, and perhaps most controversial of all, for reform of the monarchy to curb King Vajiralongkorn’s broad powers.

While the Bad Students firmly press both the schools and government to respond to their demands, the mood at their rallies is joyful. The day I was there, the children sang protest songs adapted from popular Japanese cartoons such as “Hamtaro,” and danced together in improvised parodies of school sport events, with themes and lyrics that mock government officials and encourage other children to come out and join them.

These children have shown great creativity and even greater courage. Their activities run on a shoestring, a sort of financing as you go. But when they ask for support on social media, donations arrive in a flash from everywhere. As the protests have continued, I have seen more and more adults — activists, parents and relatives, and even older people — placing themselves in a protective fashion between the children and police lines. Some adults have volunteered to be security guards and medics. Others bring food, drinks, megaphones and even mobile toilets to support the children and their protests.

What is critical is that these adults are supporting and backing the children, but not trying to dominate the stage or interfere in their messages. “These children are the future of Thailand,” one adult supporter told me. “This is their fight, and we will keep them safe and well.”