AUSTRALIA: Film Made Available to Schools 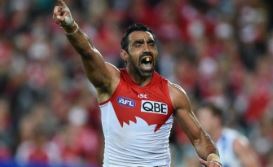 “The Final Quarter” a film about the final three years of the career of Adam Goodes, an Australian Rules Football player and advocate for Australian native peoples, has been made available to schools across Australia together with a set of lesson plans and education materials. Goodes was frequently hounded by racist abuse from opposing fans during the final years of his career. Ian Darling, director of the film, is quoted as saying, “we’ve focused our free education campaign on schools and sporting clubs so the next generation of young Australians has a greater awareness about racism and its impact…”