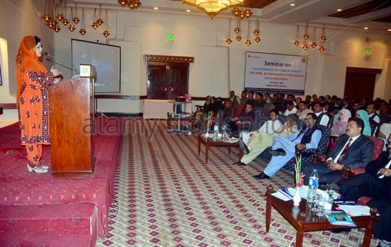 Posted at 16:02h in News by Emily Homer
Share

A training session was organized by the University of Balochistan in collaboration with the Higher Education Commission. The training concluded that teachers have a significant role in the promotion of human rights, and some speakers suggested including human rights topics in education curriculum.

“The role of teachers is significant in character building of students to achieve lasting peace, promotion of human rights and resolution of religious, political conflicts; was said by speakers at a workshop titled ‘Insaniyat, Ikhlaqiyat and Shhariyyat in Pakistan’. Representatives of civil society, educationalists and scholars attended the event and said the role of teachers and students was significant in promoting peace, fraternity and resolving disputes in the society.

“Highlighting the importance of training sessions, the speakers stressed such sessions were need of the hour. They advocated the importance of cementing relations among government, state and educational institutes, adding that the protection of human life was imperative.

“They suggested including human rights topics in education curriculum. They said conflicts among students could only be resolved by a judicious approach.”

By the Lahore Daily Times